Statistical data on baptisms in the Nordic folk churches has been an important background for the discussions on the role of baptism in the churches, and the processes coming out of that discussion. In the premodern society, Christian baptism was mandatory for all citizens, and most baptisms were conducted as infant baptisms. In modern societies, growing religious tolerance, increasing secularization and religious pluralization led to decline in in the percentage of infants that were baptized in the folk churches.

While the decline was slow during the 20th century, in the last two decades the decline has been accelerating. The development has been the same in all Nordic countries, even if the point of departure was not the same. As the table shows, in the year 2000 Iceland and Finland had the highest percentage, Sweden the lowest, with Norway and Denmark in between. In 2018, the percentage was substantially lower, Sweden had 32,6 percentage points, Norway 30,0, Denmark 25,8, Iceland 43,5, and Finland 23,8). Showing the same tendency in all countries, the percentage has dropped much more in Iceland than in any other country. Starting at the same level as Finland, Iceland is now almost at the same level as Sweden.

The numbers do only include baptisms in the five folk churches. Baptisms are also conducted in other churches, including in the LWF member church The Evangelical Lutheran Free Church in Norway. This means that these numbers do not reflect the total picture of the position of Christian baptism in the Nordic countries, even if numbers in other churches are much smaller than in the folk churches.

The statistics also treats all baptisms as infant baptisms. This is not quite accurate, as also older children, youth and adults are frequently baptized. This is especially the case in connection with confirmation when a confirmand has not been previously baptized. Even if these numbers are growing, they are still statistically insignificant compared to the number of infant baptisms to impact statistics.

An important factor behind the decline in baptism percentage is the religious pluralization that is a result of migration. Migrants often belong to other religions or other religions than the Lutheran faith. At the same time, previous members of the folk churches have left the church and joined another religious community, or no community at all. The percentage of baptisms thus has to be seen in the light of the percentage of church members in each country. The numbers are shown in the following table:

When correlating the percentage for membership and baptisms, Iceland scores lowest on this relation, Finland the highest, with the three other countries in between. The discrepancy between membership percentage and baptism percentage can be explained by (at least) two factors.

On the one hand the membership percentage is not the same in all age groups, which means that the membership percentage among those who becomes parents might be lower than the average. On the other hand not all church members baptize their children, for various reasons. Until recently, the statistics of the Church of Norway included numbers of children with one or both parents as church members. In 2018 only 75 % of these children were baptized, which documents this tendence for church members not to baptize. 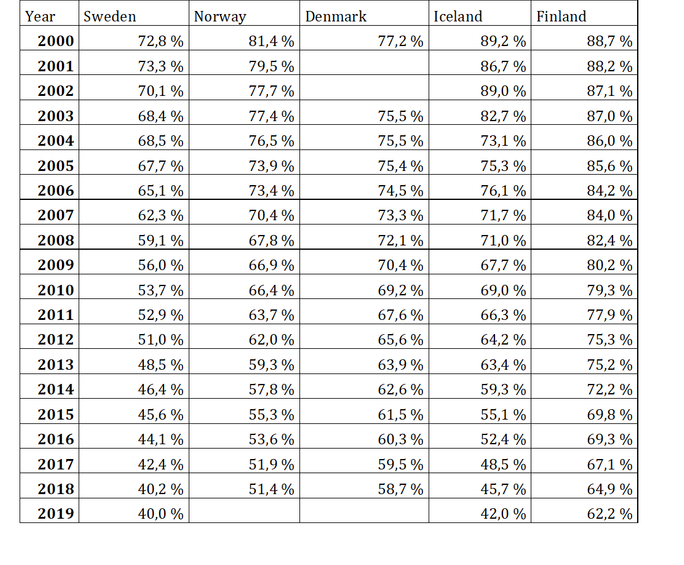 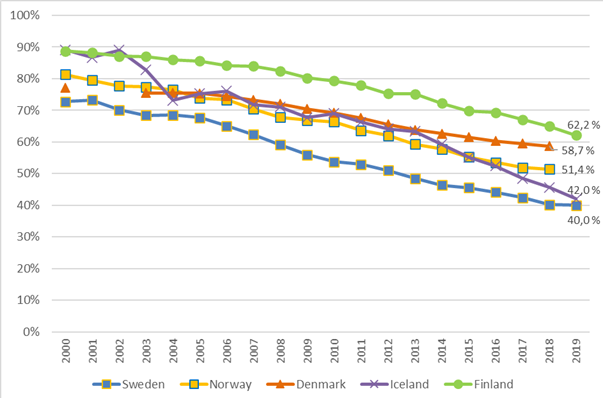