Sweden and Norway have both revised their liturgical handbooks recently. In Sweden the new handbook was accepted by the General Synod in 2017 and practically introduced in the church Pentecost in 2018. In Norway a new baptismal liturgy was authorized in 2017. Discussions exist in both Denmark, Finland, and Iceland concerning new liturgies, especially in relation to baptism. In Sweden and Norway, the baptismal liturgy is still a debated topic, even after the authorization of the service handbooks.

One section of the Danish ritual is the address to the godparents, which contains phrases that do not have counterpart in the other churches’ rituals. According to the material, there is an on-going discussion concerning the baptismal liturgy with special attention paid to the address of godparents, which many pastors exclude or modify. Those engaged in the discussion emphasize different key terms for baptism than what has been stressed in the past: thanksgiving, grace, and blessing, rather than salvation and forgiveness of sins. The issue of original sin is part of the discussion as well as it is in the other Nordic countries as well.

When examining the liturgies comparatively, a few elements stand out. One element is the role original sin plays in the liturgy. Most of the Nordic countries discuss this doctrine in relation to baptism but the actual application of it in the liturgy differs. The discussion in Denmark has resulted in the replacement of words and phrases connected to original sin with other theological tropes, such as thanksgiving, blessing, grace and the forgiveness of sins. These tropes are worded in almost every section of the liturgy. Similarly, in Norway, phrases connected to original sin have been replaced with a Nordic interpretation of a theology of creation.

Norway and Denmark have an explicit renunciation of the devil in the liturgy whereas in the Finnish and Swedish order, a prayer of liberation exists which is a theological remnant of exorcism. There is no similar section in the Icelandic ritual. The baptism as a washing away of sins is only formulated thusly in the Finnish and Swedish material, with the Swedish order standing out as more strongly formulated: “…so that the one baptized in this water will be cleansed/purified from the guilt [burden] of sin.” In the pouring of the water just before the baptism ceremony the Norwegian, Icelandic, Finnish and Swedish prayers have alternative methods including an epiclesis of sorts. 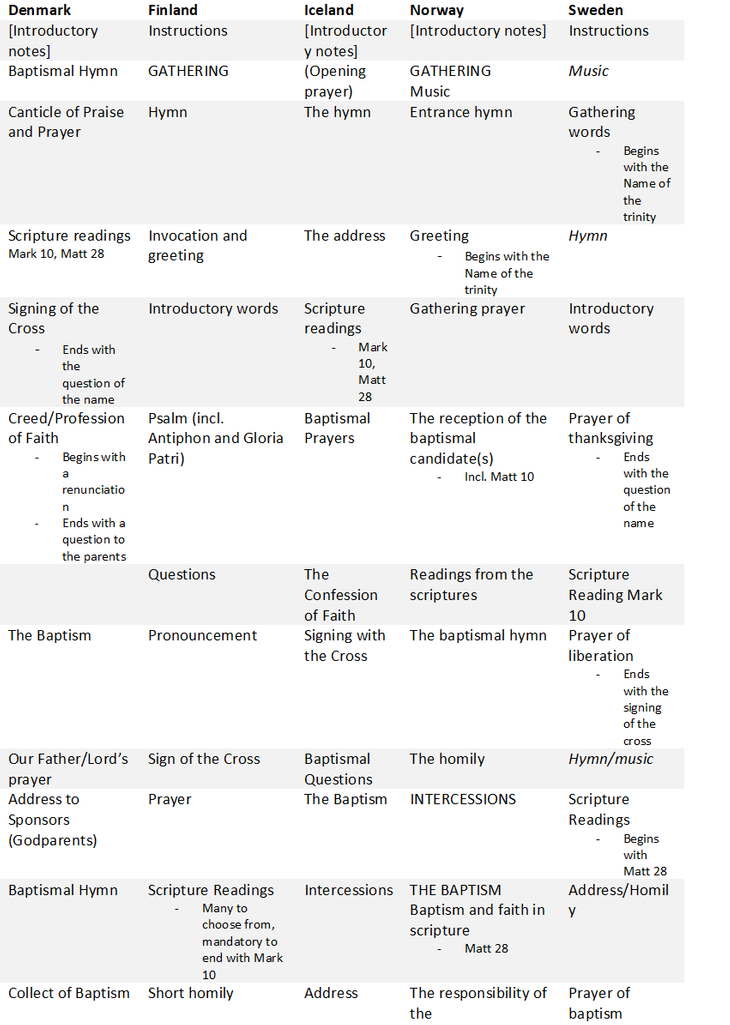 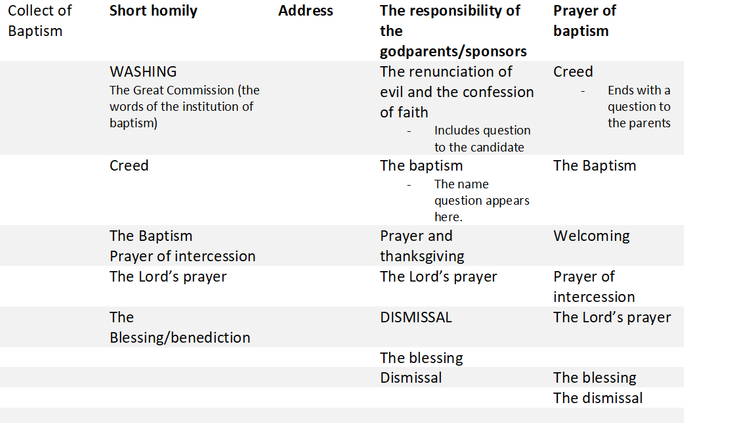