The position of baptism as a tradition in Icelandic society is changing. This can be seen in statistics where numbers are decreasing and in the popularity of other forms of name giving ceremonies which has increased [1]. The General Assembly of Þjóðkirkjan, the Evangelical Lutheran Church of Iceland [2] (ELCI), has responded to this in 2016 by establishing a working group on baptismal education. The bishop‘s office also put baptism as a focus project in its education 2018-2020. The liturgical committee of the church has sent a new baptismal liturgy to several pastors for trial. A ritual for infant blessing has been available since 2009, especially aimed at parents who do not want baptism but still want to have a blessing, often in connection with the name giving. No major research has been done in connection with baptism for the last three decades.

Statistics on baptism and membership

Statistics show that the number of baptisms in Iceland is decreasing. In the year 2000, 93 % of children born that year were baptised in the ELCI. In 2019 the equivalent percentage was 48 % according to statistics from the central registration office. The central registration[3] of a religious affiliation of a new-born followed the registration of the mother until 2012.  According to present legislation, children are registered automatically if both parents belong to a certain religious or life stance association. If not, they are registered without a religious or life stance affiliation. This can be changed by the parents.

*Number of baptisms year 2000 - 2004 is a summary from the pastoral records, sent to the bishop’s office. There is a possibility that they are incomplete (i.e. that one or more pastors did not send their records).  Number for baptisms 2005 - 2019 is from the Central Registry Office - Registry Iceland (skra.is). Number for newborns in Iceland are derived from the Centre for Statistics - Statistics Iceland (Hagstofa.is). Number of infants that are born within the church are from the Central Registry office. Those numbers were not available for the period of 2000 – 2004.

In Iceland, a large number of baptisms are conducted either in the home or in private church ceremonies[4]. During the 20th Century in Reykjavik baptism often took place at a private service in the vicarage, which – as opposed to the church or the building used for services – was warm. The tradition of home baptism dates back centuries and was due to the country’s predominantly rural population. People needed to travel a long way to get to church, often in difficult conditions and churches were cold. A decree dated 1771, July 27, on home baptism stated that „parents can decide, depending on the child‘s health and circumstances.“[5]

Further research is needed to explore the frequency of home baptisms and the reason it is still so common. Why do people choose a baptism in the home? Home baptism is also practiced in Norway and Finland and a comparison between the countries would also be valuable.

Furthermore, in connection with home baptism another question emerges – why is a private baptismal service in a chapel or a church – without the presence of the congregation – much more common than baptism in the Sunday service, where the congregation can be a witness and welcome the new member? Can this be linked to a lack of awareness of belonging to a congregation or of the parish? Or is it simply for convenience? Many parents worry about having to sit through a service with children who might not behave. In Iceland this can possibly also be seen in connection with the fact that pastors, especially in the capital area, often baptise children that are not part of their parishes.

The question in both cases is how to link the baptism and the families to the church and congregation (regardless of parish boundaries). The baptismal committee has suggested that the children who are baptized each week should be remembered in the prayers during worship the following Sunday.

Current liturgy for baptism is in the handbook of 1981. The chapter on baptism is divided into four chapters. The first is the liturgy if the baptism is part of the Sunday worship. The second is a separate baptismal service. The third is a liturgy for an emergency baptism (e.g. If a child is very ill) and the forth is for the ritual when an emergency baptism is declared and confirmed in the congregation. The liturgical language of the handbook in general is archaic for many young church members. The vocabulary is complex and the use of an old version of the pronoun first person plural (vér, oss, vor) is easily misunderstood by younger people. The liturgical committee of the ELCI has sent a new form for baptismal liturgy to a handful of pastors to try. So far there is no official evaluation. The language is less antiquated than the present form and sentences are added to explain or place parts of the ritual. It also involves the godparents more than previous ritual. According to the new proposal, when baptism forms part of the service, the first part (before the gospel) is dedicated to the baptism and it forms part of the sermon.

In February 2020 a form for a family theme service on baptism was introduced.  It uses the Messy Church[6] approach and has various approaches to help young and old understand baptism. It is not a liturgy for baptism as such.

All children born 2007 received in the spring of 2020 a T-shirt with the logo of the ELCI to remind them of upcoming confirmation classes. Linked to this is a website. There, a link to the baptism is found as the T-shirt should remind them of the white baptismal gown, white for grace, long so that they can grow into it and the baptismal gown is linked to the white confirmation robe.

In September 2020 the Bishop of Iceland planted the first trees in what will become a forest, one tree for every new baptized member in the country. This forest is at the old bishop's seat Skálholt, but the plan is that churches around the country designate part of their land to a baptismal forest.

A new website, skírn.is, has recently been opened. It links directly to the website of the ELCI and opens a page on baptism. The website has information on baptism, what it is, how it is conducted, it's history and suggestions for hymns. There is a chapter on the various symbols and traditions related to baptism.  It also includes a story from young parents who recently baptized their child. The language of the website is easily understood and the website is user friendly but not interactive.

The working group on baptismal education sent its report to the General assembly in 2019. It details the proposed changes in the new trial liturgy. These include increasing the role of parents and godparents in the baptismal service. There is also a suggestion to work on the language of the liturgy to increase general understanding. They propose liturgy (to be made) on services to remember one’s baptism and a special Sunday each year dedicated to baptism, where all children who were baptised that year are specially invited. A book on baptism for children is also in the pipelines.

The working group has pointed out the obvious lack of research on baptism in Iceland and stressed the need for further study on various aspects, including why young people choose not to baptize their children. The recommendations of the working group have not yet been sent to the parishes.

There has been a lack of research on baptism in Iceland for the last 30 years. Two BA studies can be found, both using qualitative research methods and a relatively small sample. A quantitative survey on Religion in Iceland, was conducted by the Theological Institute in Iceland, and published in 1990. The survey included questions on baptism and what meaning it had for people (respondents marked the sentences that they agreed most to). Approximately 30 %  of respondents felt it was a ceremony that had a lot of meaning for them (option b) and 40 % that is was only one of the church's traditions but had a certain meaning for them (option c). There was no marked difference in replies between age groups.

Analysing the answers with reference to statements on faith, those who confess the Christian faith or are defined as having faith in resurrection have similar answers regarding baptism.  On average 49.5 % of them opt for (b) and 29 % for (c). Those with a slightly less defined faith (private faith) still agreed with those statements, 31 % with (b) and 54 % with (c) and even 35 % of agnostics agreed with (c)[7]. It would be logical to conclude that these statistics have changed, since the role of baptism has changed. However, a BA study in anthropology in 2011 finds that baptism has significance for participants both as a religious and a family event and the baptismal event makes the symbols of baptism (e.g. water, candle, dress) holy[8]. This raises the question whether the meaning and significance is the same or stronger when baptism is not a self-evident tradition but a conscious choice.

[1] There is are no statistics available on this frequency but it is discussed in two BA thesis at the Univeristy of Iceland: Bragadóttir,D. ” "Ég skíri þig í nafni Guðs föður..." Hlutverk og þróun skírnar í íslensku samfélagi” ("I baptize you in the name of God, the father..." The role and development of baptism in Icelandic community), BA thesis, University of Iceland, 2011; Guðmundsdóttir, A.K. “Skírn og trú? Viðhorf foreldra í námi á hugvísindasviði vorið 2012” (Baptism and faith? Perspectives of parents (studying) in the department of Humanities, spring 2012), BA thesis, University of Iceland, 2012.

[2] The Evangelical Lutheran Church of Iceland, Þjóðkirkjan, is the majority folk church in Iceland, a sister church to the Nordic established churches, with formal ties to the state, stated in the constitution.

[3] Part of the duties of the registration office in Iceland it to registrate religious or life stance affiliation. These numbers are used in connection with the distribution of membership payments for religious/life stance associations. The officeis also collecting statistics on baptism.

[4] A preliminary survey, done in May 2020, indicates that half of all baptisms take place in private homes or other private locations. The survey, conducted online and sent to 155 ordained members of the ELCI (all ordained working pastors and bishops) only had a 2 5% response rate and is therefore not conclusive. But the 39 answers gave strong indication, 6 % of children were baptized in a Sunday worship, 44 % in private services in the church and 50 % in homes. The survey was conducted by Steinunn A. Björnsdóttir, using SurveyMonkey. Contact was made via email. It has not been published. 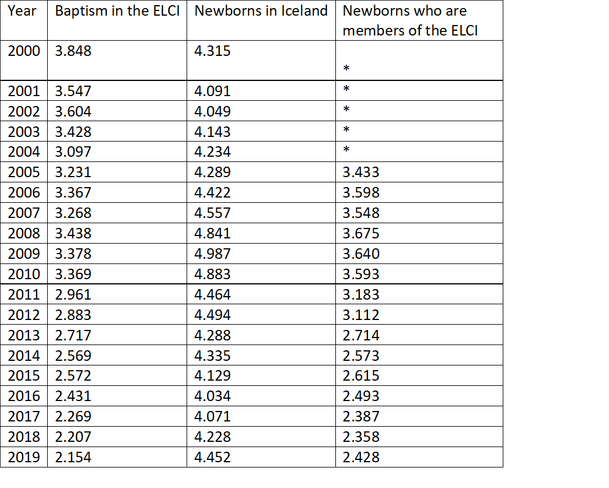