The Church Research Institute of the Evangelical-Lutheran Church in Finland provides frequently statistical information on Finnish religiosity and its changes. The most recent empirical data are available in the 2020 publication Uskonto arjessa ja juhlassa: Suomen evankelis-luterilainen kirkko vuosina 2016-2019 that provides the official analysis of the Evangelical-Lutheran Church in Finland and its surroundings from 2016 to 2019. All statistics and graphics below are from this publication.

In general, members of the Church highly value an option to have an ecclesiastical ceremony at turning points of their life. Even four out of five members mention this as a major reason to be a member of the Church. However, despite appreciation in principle, the amount of Church ceremonies is declining among Church members. In comparison with other ceremonies, baptizing children has not experienced as steep decline in numbers as, e.g., conducting ecclesiastical marriages, but one can discern a downward curve also in case of baptisms. However, ecclesiastical funerals have kept their significance in the Finnish culture.

Table 1. Popularity of church ceremonies in 2000–2019 among general population

However, one can detect significant regional differences which are presented in Table 2. In the rural dioceses of Oulu, Kuopio and Lapua more than 70 % of children were baptized in 2019 whereas in Helsinki diocese the share of baptized children was only 40 %.

2. Sociological factors behind the numbers

One can detect some explanations for this negative development in the number of baptisms.

The birth rate is declining. For instance, in 2010 around 61 000 children were born in Finland whereas in 2019 the number of newborns was only 45 600. Given that families with migration background (7,3% of population first generation migrants) are more fertile according to statistics (14% of children born to first generation migrant mothers) and only seldom belong to the Lutheran church, one can understand why absolute numbers of Lutheran baptisms cannot be as high as they used to be.

However, this does not explain everything. There are quite many people who are not willing to have any religious ceremony related to childbirth, as presented in Table 3.

Table 3. Significance of religious ceremony in connection with childbirth in different age groups by gender

It is very significant that this attitude is most evident in the age group of 30–39 years, i.e., among those who are in the age of establishing a family. Notably, 57 % of men and 52 % of women are in some way not willing to have a religious ceremony with a newborn.

Surveys also shed light on reasons behind decisions of parents whether to baptize their child or not.Tables 4 provides information on positive decisions to baptize a child in families which have at least one child baptized and, accordingly, table 5 on negative decisions. This part of data is based on a separate questionnaire on baptism as a part of “Baptism and Sponsorship” -project of the National Church Council which began in 2018. Next to these results, empirical data reveals that many parents make their mind up well before the childbirth. More than two out of five make their decision even before they start relationship with their partner.

Table 4. Reasons to baptize a child in families which have at least one child baptized. Survey on baptisms 2019. (n=), percentages

Table 5. Reasons for negative decision on baptism. Parents that have an unbaptized child/children. (n=223). Survey on baptisms 2019, percentage.

Recently, there has been some discussion whether a child could be also blessed on parents’ demand instead of baptizing him or her. Bishops have taken critical attitude to this option with exception of multireligious families which may need this option as a pastoral arrangement as explored in guidelines for multireligious settings.

Due to these discouraging statistics, there have been efforts to contest these tendencies. As mentioned above, the National Church Council launched a project titled “Baptism and Sponsorship” in 2018 which is ending in 2020.

Next to this, there have been many significant initiatives and campaigns implemented by local parish unions or parishes. For instance, Helsinki parish union had its campaign “Pienelle parasta” (Best for the little one) which approached families with a newborn and accompanied them for years with small gifts, happenings and so on.

There have also been baptismal campaigns at the local level which have aimed at making it easier to have a baptismal ceremony. For instance, Tampere parish union arranges regularly “Aamukaste” (Morning dew) campaigns which plays with Finnish words as aamukaste means “morning dew” and kaste means “baptism”. It advertises itself in following words: “It cannot be easier to organize baptism. In the Morning dew everything is prepared for the family including coffee with cake and decorating of the church.”

In 2019, the General Synod decided that, instead of two godparents, it will be sufficient for a baptized person to have a single godparent, as long as the godparent is a baptized and confirmed member of the Evangelical Lutheran Church. This decision ensued from the observation that it is not always easy to find two persons qualified to be a godparent and aimed at warranting baptisms in these situations not so infrequent in urban settings. On the other hand, parents are still very willing to have their friends and relatives as godparents for the child, and the role is considered as significant. Not infrequently, parents name their friends to be godparents and then the pastor has difficult situation when it is noticed that these godparents are not fulfilling the requirements of the Church order.

One significant feature of the Evangelical Lutheran Church of Finland is that it encompasses also traditional pietistic revival movements. Some of these have their own interpretations of child baptism emphasizing personal faith and even explicit conversion which differ to some extent with the confessional Lutheran teaching. This has prompted quite many writings and debates in baptismal theology during the 20th century.

Even though some of these issues still act as demarcation lines between different pietistic movements stimulating occasional papers, one can see general tendency that the accent of theological research has shifted solidly towards eucharistic theology in recent decades. One reason for this is that ecumenical priorities of the Evangelical Lutheran Church of Finland have shifted towards Orthodox and Catholic churches.

The declining statistics of baptisms has recently generated some research interest in baptisms, but mainly in the field of Church sociology. However, there is obviously also increasing demand for novel theological interpretations of the meaning of baptism. 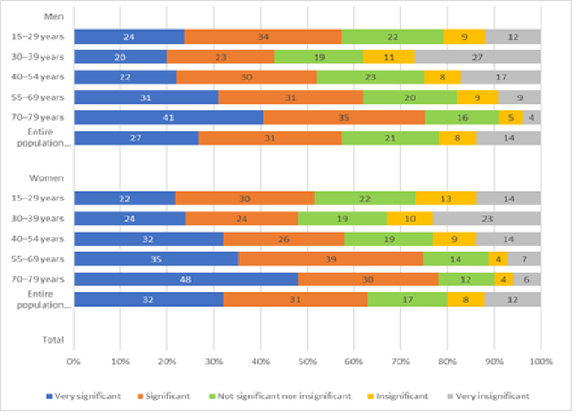 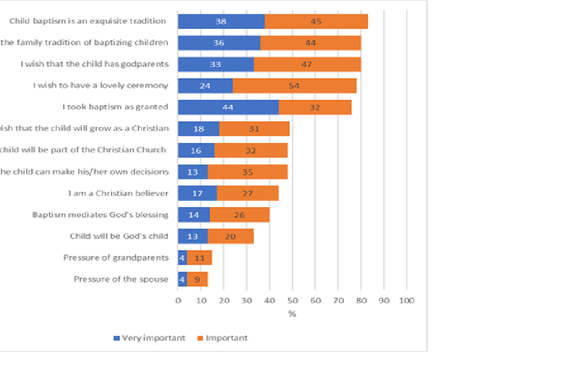 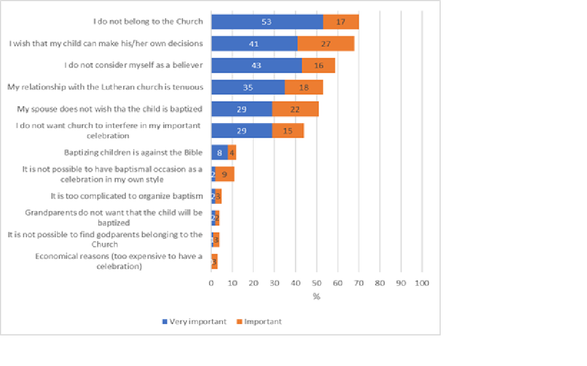