Development in baptism in the last two decades, by Jonas Adelin Jørgensen

The primary point of entry for members in the national Folkekirken (Evangelical Lutheran Church of Denmark) is baptism as children. During the last two decades, a clear decline is observed from 77,2 % in 2000 to 58,7 % in 2018. Researchers agree that this should be seen as part of a longer historical development, where falling percentage of children are being baptized. Looking into social and cultural – and maybe also theological – processes supporting or discouraging baptism, it is possible to identify a number of processes: Religious and cultural traditions, family traditions, and ritual aesthetics support decision for baptism. Urbanization seems to be a negative factor in Danish context, whereas age of parents and migration remain ambivalent factors, both supporting and discouraging baptism. It might be hypothesized that secularization, pluralization, and individualization are negative factors, discouraging baptism. However, secularization does not seem to follow the logic of secularization theories in so far baptismal practices are concerned: the older, more educated and more wealthy part of population also tend to have their children baptized more often than other groups in Danish context.

In 2018, 41.456 baptisms took place in the majority church, the Folkekirken (Evangelical Lutheran Church of Denmark). The total number of members was 4,332 million in 2018, equaling 74,9 % of the total population of 5,781 million who participated in activities in more than 2.300 parish churches. The level of religious activity is very low in Denmark with less than 2 % of the population reporting weekly attendance at religious services. At the same time, almost three quarters of the members claim to have been participating in one ecclesial activity or the other in the last year (Felter & Bjerrum 2015). Primarily children below the age of 1 was baptized, but also children and adults are counted in this sum.

There are several significant statistics on baptism and membership of the national ELCD in the period from 2000-2018. In this introduction two statistics – on percentage of baptisms and on relation between urbanization and baptism – is presented. First, there are large variations across the 10 different dioceses in Denmark when it comes to baptism and subsequent membership of the Folkekirken:

The statistics display an overall tendency of steady decline in the number of baptisms from 77,2 % in 2000 to a mere 58,7 % in 2018 of total 0-1 years only children in Denmark. The difference in numbers between different dioceses might have to do with the degree of urbanization. A closer look at relation between size of town and membership of churches for 0-4 years old in the decade from 2004 to 2014 confirms this:

The statistics on membership – which is primarily happening through baptism for the age group 0-4 years old – confirms that there is a clear correlation between high degree of urbanization and low level of baptisms. The larger the city, the more rapid the decline in numbers of baptisms. In the capital area of Denmark – including Copenhagen Diocese and part of Helsingør Diocese – the percentage of baptisms is all time low in 2018 and the fall seems to be more rapid compared to other parts of the country.

In recent years both national reports on decline in baptism and discussions on possible revision of baptismal theology and practice has taken place. The Ministry of Ecclesial Affairs established a work group focusing on revision of baptism in 2002 and again in 2014. The first work group reported their findings in 2004 resulting in a slight linguistic revision concerning ordeal of baptism, and the second working group is to report their findings mid-2019 (postponed until 2021).

Several reports focus on parents’ use of churches and relation with organized Christianity, and documents how contemporary parents favor casual rituals such as special baptismal services over the sacramental character of baptism which emphasizes the passive, unconditional, and communal. Main motives for baptism among contemporary parents are: a) tradition; b) faith; c) community.

So-called ‘drop-in baptism’ has gained attention, and although the number of baptized persons is relatively low – a few hundred annually. Discussion has centered upon relationship between baptism and subsequent instruction, and whether drop-in baptism caters to another set of motives than traditional infant baptism.

Concerning possible revision of the theology and practice, discussion has centered on the historical interpretation of Lutheran sacramental theology, original sin, faith, salvation, and theological anthropology. Main questions have been whether baptism of infants is theologically necessary, and whether baptismal practice presupposes an understanding of original sin that is theologically questionable. Various attempts to reformulate the baptismal rite has focused on the unconditional love of God and baptism as an act of gratitude and acceptance of this love.

A subset of this material discusses baptism of asylum seekers, something which emerged with renewed intensity after 2015. Also, the question of ‘double religious belonging’ surfaces in newer discussions, reflecting the increasingly religiously pluralistic nature of society at large but also of individual families.

The curve seems to be straight in a steady decline for the last three decades, and in a near future, the number will drop below 50 %. For a number of commentators this signifies that Folkekirken eventually are becoming increasingly marginalized in Danish society as it ceases to be a majority church.

The response has been a number of campaigns to counter the trend. Two different types of campaigns should be mentioned: First, the campaigns aimed at local pastors and congregations, helping them to think through their role in baptism, welcoming parents, explaining what baptism means, designing meaningful liturgies, etc. The second type is more general awareness among members – especially new parents – of baptism as a central Christian ritual and its sacramental character.

A number of pastoral books on baptism has been published, offering suggestions for baptismal sermons and rethinking of the role of pastors as dialogue partners in their conversation with members and non-members trying to work out their religious identity. A few books aimed at parents deciding for baptism has been published, discussing e.g. what is expected of parents who baptize their children.

Finally, a few popular books including children’s books on baptism has been published.

Historically, the baptismal practice of Folkekirken has appealed to a majority of members of the church and established an entrance to the church. However, sociologists of religion har argued that individualization and detraditionalization affects religious life, as members tend to use of the church less for rite de passage (Andersen & Lüchau 2011). Other researchers point to secularization and individualization as factors undermining baptism (Gundelach, Iversen & Warburg 2008), and others point to interaction with other religious traditions and secular ideologies causing a steady decline in knowledge about Christianity and baptism (Nielsen, Høgild, Thusgård & Ørgaard 2016). Others point out the clash between the sociological and experiential dimensions of baptism: The sociological dimension has to do with the relation between family and church (a rite de passage) whereas the experiential has to do with religion as such (Bidstrup 2011).

In his 2014-report Peter Lüchau argues from statistical data that more children are baptized in congregations where members are more well educated and the age of mothers relatively older, where percentage of members is high, and where church taxes are relatively higher.

Baptism in Denmark seems to be positively affected by religious, cultural traditions, family traditions, and aesthetics of the ritual. Age is a possible positive factor, while urbanization and migration remain ambivalent factors. Secularization is a negative factor, but the effect of secularization is surprising in that baptism remains high among well educated, high income, and older part of population.

The theological studies might be further subdivided into several groups: First, part of the material is concerned with baptism within the framework of ritual theory. Whereas ritual might be a rite de passage, in theological perspective rituals are also reorientations. In theological perspective, the challenge with current baptismal practice is that baptism becomes an active, individual choice rather than a passive communication of grace, more fitting to a Lutheran understanding (Bidstrup 2011). Furthermore, theological studies argue that there is no one theology of baptism in contemporary ecclesial life, even if the wording might be identical. Other theological studies argue that the current situation urges the church to accept both the ‘covenant aspect’ as well as the ‘confession aspect’ of Christian baptism (Jørgensen & Iversen 2016). The question whether baptism as a ritual has changed meaning from a ‘ritual of salvation’ to a ‘ritual of belonging’ is discussed, and whether baptism theologically signifies cleansing and liberation (Larsen 2018). 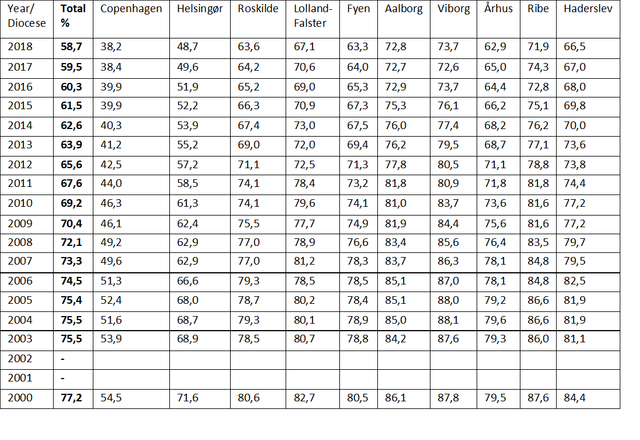